Whether you come to Tossa de Mar for the beach, warm nights, traditional festivals or Vila Vella (old town), all are there to enjoy in this city with multiple facets, with its gleaming waterfront as the old narrow alleys and souvenirs. Everyone will find their part of Tossa de Mar. 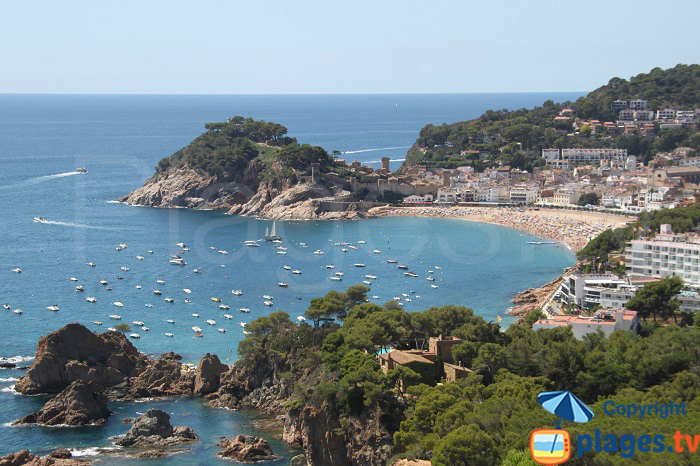 Named Turissa in Roman times, Turso in the Middle Ages, today the walls of Tossa have hardly changed since the fourteenth century, when the town was enclosed by a fortified wall and beyond by Selva, the wild forest. 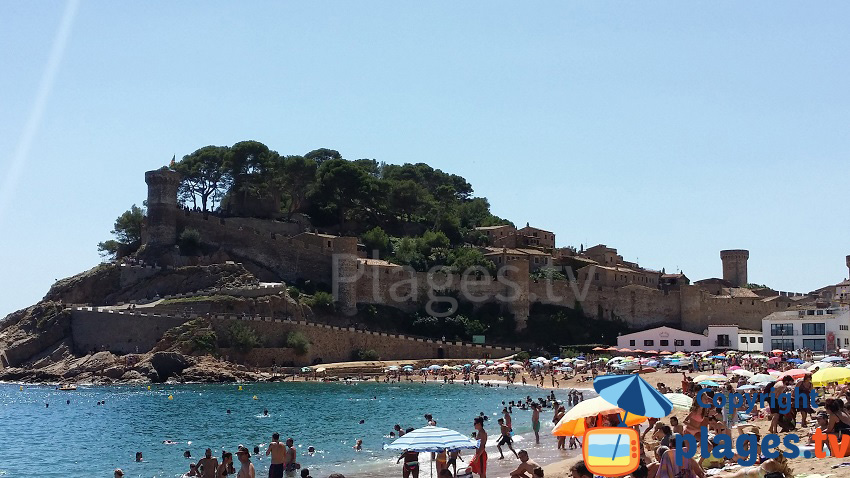 The Old City is the last intact example of fortified coastal towns in Catalonia. This was to protect themselves from pirates from North Africa. On almost all the beaches there is a watchtower. Here there is the whole citadel. It is located on the beach, which gives a stamp to it that many resorts envy. 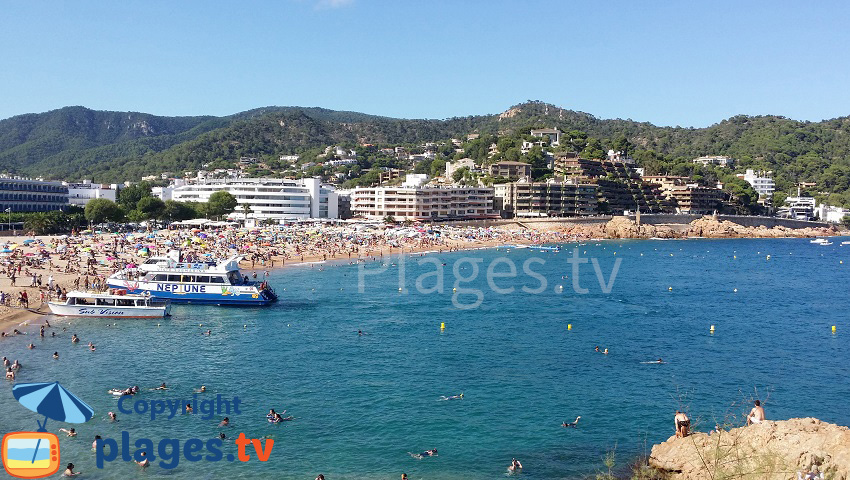 By following the walkway that goes up to the old town, Tossa bay and its main beach (Platja Gran) gain in majesty. It is a very busy place in the summer season. Its speed boats will allow you to explore the Costa Brava or the seabed. 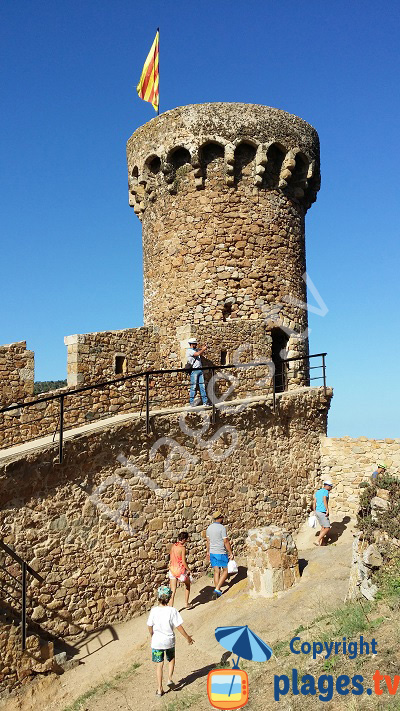 Built in the twelfth century, the enclosure was completed around 1387 and its shape has hardly changed since. 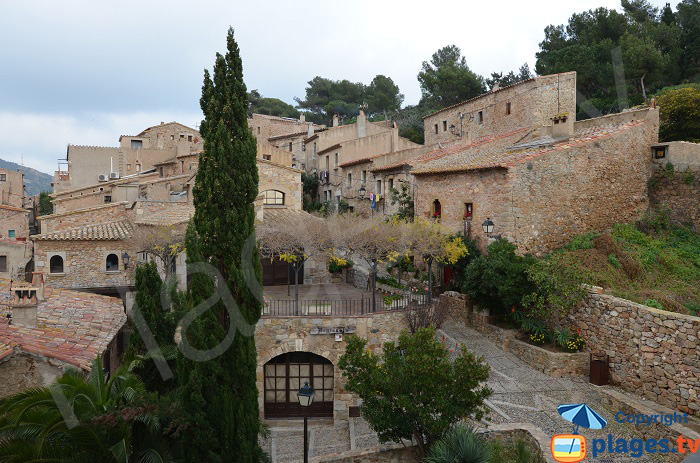 During the hot period, it is good to go find some freshness in the old city, surrounded by a medieval wall with seven defence towers. Lavila Vella dominates the bay from a height of 70 meters.

On these heights, we come across the work of the Catalan artist Ció Abellí: the statue immortalizing Ava Gardner. Ava Gardner who discovered Tossa in 1950 while starring in Pandora alongside James Mason.

But it was a secondary actor, the famous bullfighter Mario Cabré that the actress had a torrid relationship with that created the controversy since she was then married to Frank Sinatra. The resort has changed since: the vineyards are gone and tossencs fishermen are more and more rare. 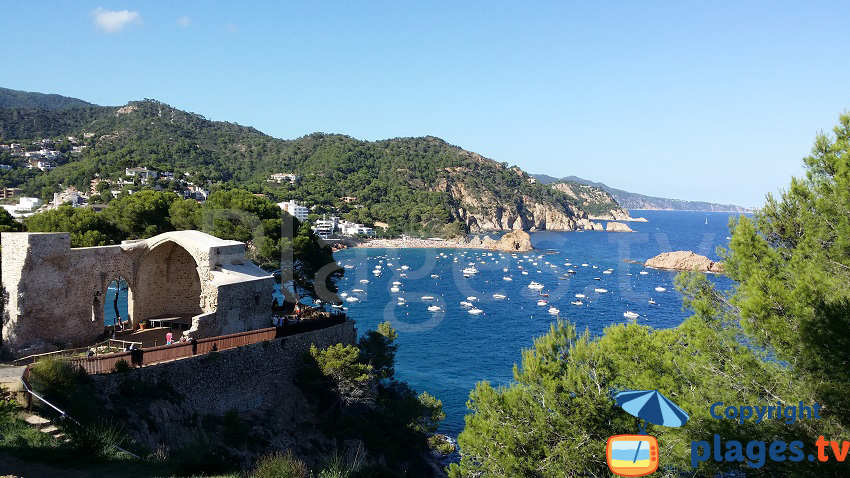 The most photographed building in the old town is probably the Gothic church ruins in Sant Vicenç (on the left). Built in the fifteenth century, it was destroyed in the XIXs century by the French and by accident ... They had stored explosives! The citizens of Tossa completed the work using the church stones for the construction of their homes. All that remains is the apse, the statue of the saint, the remains of the choir, a chapel and part of the bell tower. The view is splendid. 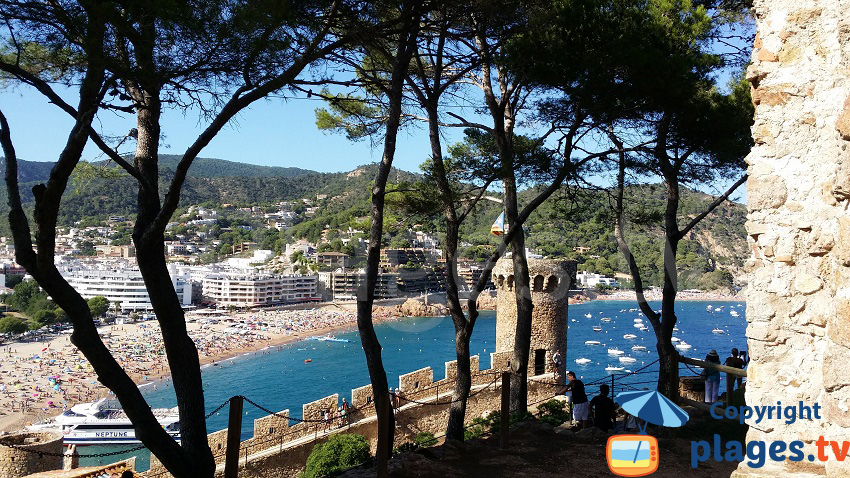 The walkway (Cami de ronda) starts here and goes to Lloret de Mar. It has been restored from the early 2000s. 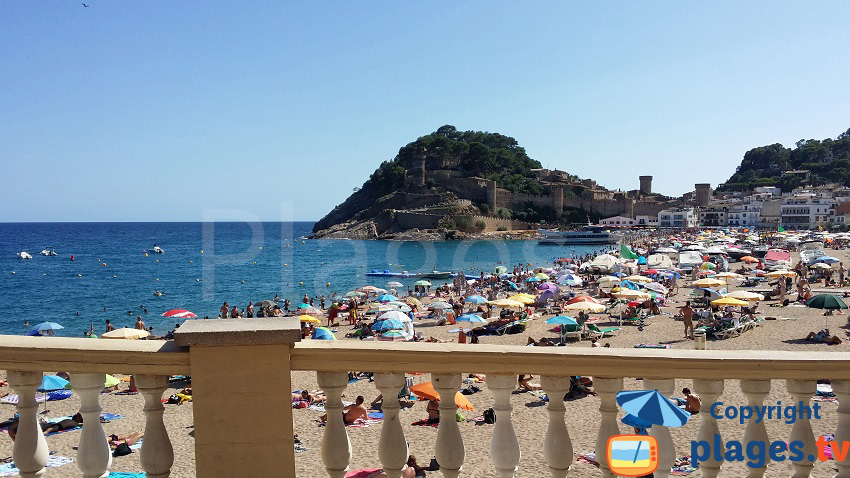 A path along the coves and beaches: Cala d'es Codolar (pebble cove), Platja Gran (the one above) and Mar Menuda. 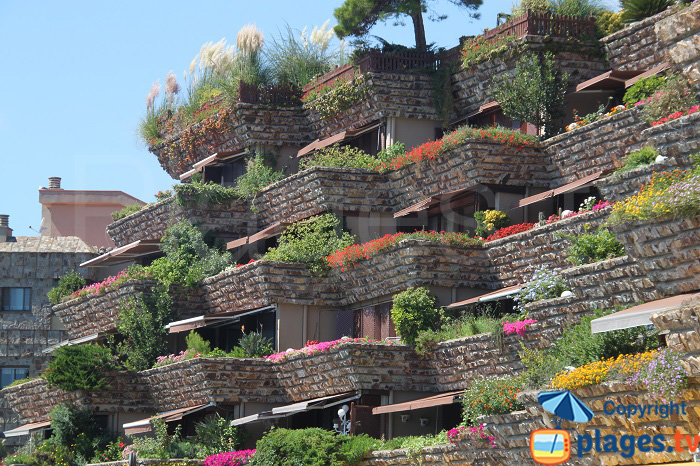 Between these last two beaches, Catalan architects were able to be creative without disfiguring the coastline. 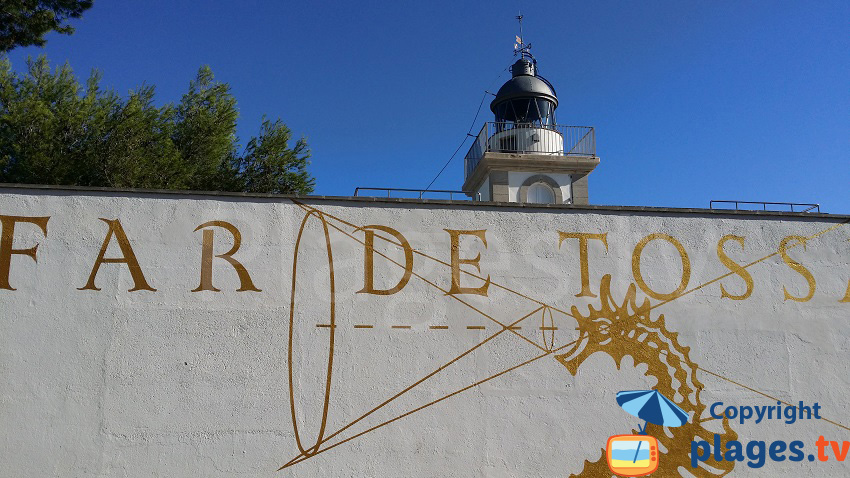 Other construction, Far de Tossa (the lighthouse) was inaugurated in 1917 to replace the old lights and establish the "luminous continuity" between Calella and Palamós. Right next to the lighthouse is the Interpretació dels Fars de la Mediterrània Centre which explains all aspects of the lighthouses of the Mediterranean. 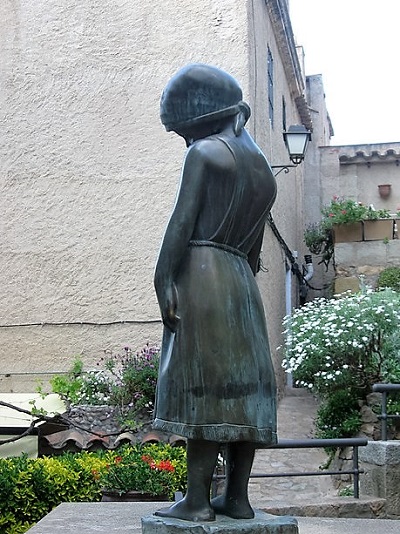 In the Governor's Mansion from the fourteenth century is now the Municipal Museum, el Museu Municipal de Tossa de Mar, inaugurated on September 1, 1935. It also includes the Torre del Codolar. It is considered the first modern museum in Catalonia. But there are also the mosaic of the Roman villa dels Ametllers with the inscription Turissa, the Roman name of Tossa de Mar. There are also many exhibits on the history of Tossa from the Paleolithic to the Middle Ages. The Municipal Museum also has an exceptional exhibition of artists who worked in Tossa in the 30s Among the paintings on display is the masterpiece of Marc Chagall: The Celestial Violinist. There is also those of Raphael and the sculptures of Benet Eric Casanovas (above). 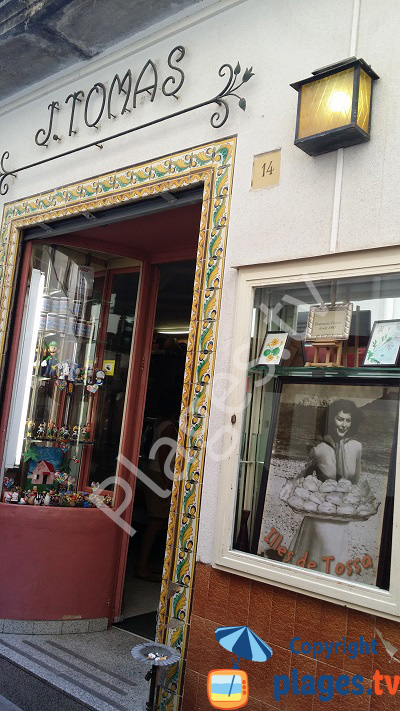 During a walk in the narrow streets of the Vila Vella, we realize that Ava Gardner left lasting traces. 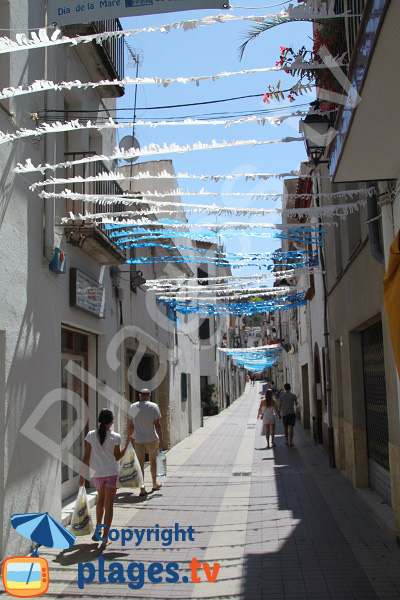 Tossa de Mar is one of those towns where Catalan customs and traditions have survived without injury. The dates of these celebrations have nothing to do with the summer season. These are mainly reserved for residents. Among these traditions, Pessebre Vivent, kind of Christmas play takes place in the Old City. Given the crowds, it takes patience to participate. On January 5, the Cavalcad ade Reis (the arrival of the three kings) through the streets of Tossa and invites children to follow. Carnival in February, involving all people in the parades that end with the burial of the Sardine. On 7 June, the Corpus Christi procession passes over a sea of flowers carefully prepared by all the inhabitants and attracts people from beyond the borders. 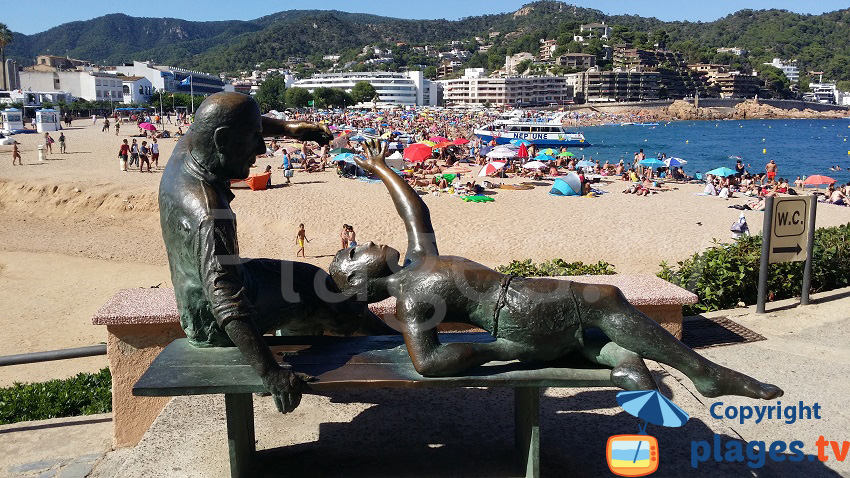 And everywhere, works of art ... 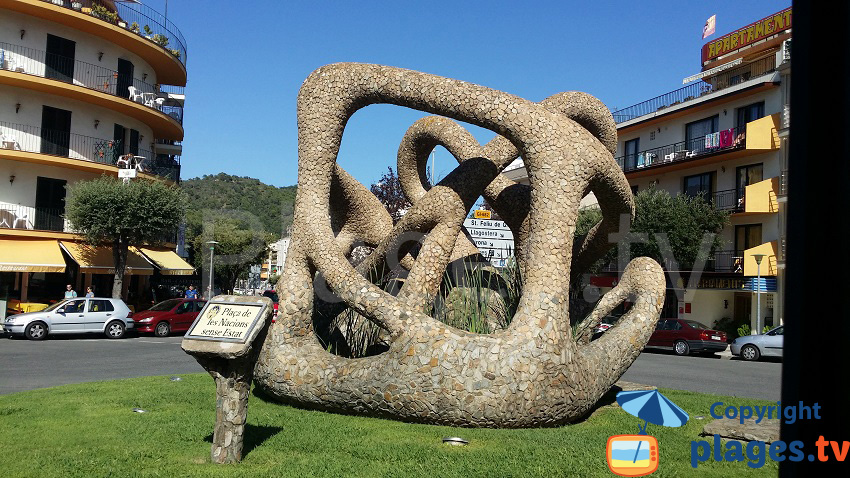 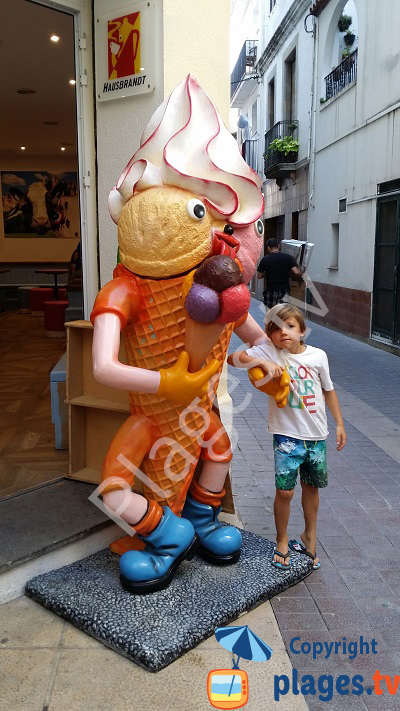 Near Tossa de Mar, take the coastal road that can get to Sant Feliu de Guixols resort. It offers the best views on this part of the untamed Costa Brava. For swimming, Canyerets Beach is a paradise. In the south, the Tossa de Mar resort is for the younger generation... 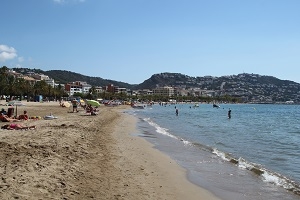 Rosas, a town between sea and mountains near France

Empuriabrava : The favorite destination of the French on the Costa Brava